United is based on the true story of Manchester United’s legendary “Busby Babes”, the 1958 Munich Air Crash and the extraordinary spirit of a city that rebuilt the team in the wake of the disaster. 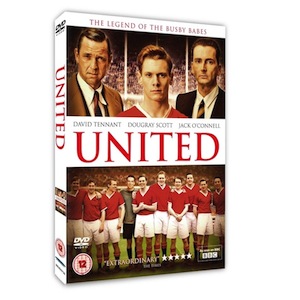 David Tennant will star as coach Jimmy Murphy, alongside Jack O’Connell (Skins, Dive) as Bobby Charlton, the youngest of the Babes, and Sam Claflin (Pirates Of The Caribbean, Any Human Heart) as star player Duncan Edwards. Manager Matt Busby is played by Dougray Scott. The film draws on first-hand interviews with the survivors and their families to tell the inspirational story of a team and community overcoming terrible tragedy.

The DVD of UNITED was released on Monday 8th August 2011. It is available from Amazon