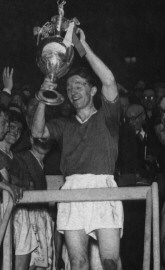 Roger Byrne made 33 appearances for the England team, and was captain of Manchester United from the 1953–54 season onwards, the legendary Busby Babes era, playing as a full-back of the traditional style, similar to a modern day sweeper. He had previously been fielded at wing-half and outside left and it was a testament to his versatility that, despite being naturally right sided, he should have been a success in a variety of positions.

Byrne was never considered the most gifted of footballers. His tackling could be suspect and his aerial ability was described as no better than average, but his incredible work ethic and footballing intelligence allowed him to position himself and react to danger swiftly. Innovatively, he was also adept at making forward runs and joining attacks at a time when full-backs were expected only to stand back and defend. Perhaps his best asset was his ability to inspire players with his charismatic leadership. Even today, he is counted among one of Manchester United’s greatest captains.

Byrne was also a regular member of Walter Winterbottom’s England team during the 1950s and was considered a possible captain of national team after the retirement of the incumbent captain, Billy Wright. His total of 33 England caps were all won in consecutive fixtures. He appeared in every England international from his debut against Scotland in April 1954 to his last match against France in November 1957. This remains a record.

He was only 28 when he died in the Munich air disaster, and on arriving home he would have received the news that his wife Joy was expecting their first child. Eight months after his death, Roger Jr. was born, and during the 1970s was a ball boy at Old Trafford.

Some years after his death, a street on a new housing development near Manchester city centre was named after him – Roger Byrne Close. Other roads and paths on the estate include Tommy Taylor Close, Eddie Colman Close, Mark Jones Walk, Billy Whelan Walk and David Pegg Walk, as well as a housing complex called Duncan Edwards Court, all of which are named after other players who died at Munich.