Following the BBC documentary about the crash (January 2006), I received 3 e-mails regarding a previously unlisted survivor.

Within minutes of the documentary ending, I received the following e-mail:

“Good evening. After watching a recent BBC documentary on the sad disaster in 1958 I was, although saddened, intrigued to find that my great uncle (George William Rodgers) was not a part of it and went on line to look into this further as I believed he was the radio operator on the flight and survived.His name does appear on the Memorial to the Munich Air Disaster, in St Luke’s Church, Dukinfield, Cheshire and I thought you might like to know as his is omitted from your list.”

“I was looking through your site as my Grandfather was a survivor of the Munich air crash, however I found he isn’t in your survivors list. He was George William Rodgers and was the Radio Officer on the flight. I’m not sure whether this was an oversight, but obviously felt compelled to contact you.”

And 5 minutes later, a 3rd e-mail landed in my inbox:

“Hello, in the late 60’s early 70s period I worked with a man who claimed to have been the radio operator on this flight and to have been one of the survivors. His name was George Rodgers. He would tell me of the inquest outcome and that the same day he learned of his wife having terminal cancer. That during the war he flew as aircrew (WOP/AG?) on Wellingtons.I do not believe he was a man to tell a tale (lie) so why is he not listed on the crew survivor lists?”

And so began some investigations….

The official accident report, of which I have a copy, states that George William Rodgers was on board the aircraft and that he was “slightly injured”. The following information has been provided by his grand-daughter:

“My Grandfather didn’t appear on the first list of survivors from the crash because he had taken off his jacket and given it to the stewardess Margaret Bellis as it was so cold, so he would have looked like a civilian.At that time my Grandparents didn’t have a home telephone, so my Grandfather was unable to call home. According to my mother (who was eight at the time) BEA representatives came round their house the afternoon of the crash.

As my Grandfather’s status was unknown my Grandmother told my mother that his flight was delayed and she was sent into a seperate room where she then learnt about the crash on the six o’clock news. Later that evening they were visited by a woman claiming to be from BEA telling my Grandmother that my Grandfather was dead and that he had deserved to die because of what had happened to the Manchester United team. This woman turned out to be a crazed Man U supporter.

About midnight of that evening my Grandmother was visited by a BEA pilot who had just returned from Munich and had had a cup of tea with my Grandfather in the hospital. He was fit enough to return home several days later. My Grandfather not only survived the crash, but went back into the plane and pulled other people out. For this he was on the 1959 New Year’s Honours list receiving The Queen’s Commendation for Valuable Service in the Air.

At home we have memorabilia from the crash, including my Grandfather’s ticket to the game and his log book from the flight.

He is mentioned in other publications, and there is a photo of him with the other surviving crew members in “The Unseen Archives, A photographic history of Manchester United” pg. 60 – he is on the far right of the photo if you have access to the book. He is also mentioned on the Manchester United website’s section on the crash which comes from the book “Air Disasters” by Stanley Stewart.

I don’t know why he is not listed with United – he was on the crew on the both the outbound and the inbound flight. I can only assume it is because he wasn’t on the immediate list of crew survivors.”

George William Rodgers left his job as Senior Radio Office in 1959 and passed away in 1997. His daughter and grand-daughter have very kindly sent some copies of memorabilia and photos- including his ticket from the match and letters from the airline and Captain James Thain. 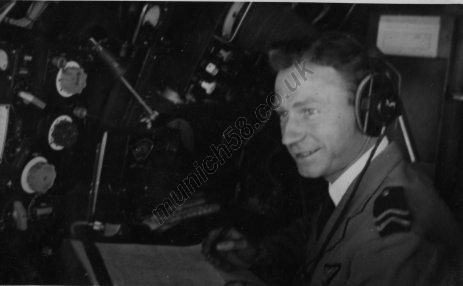 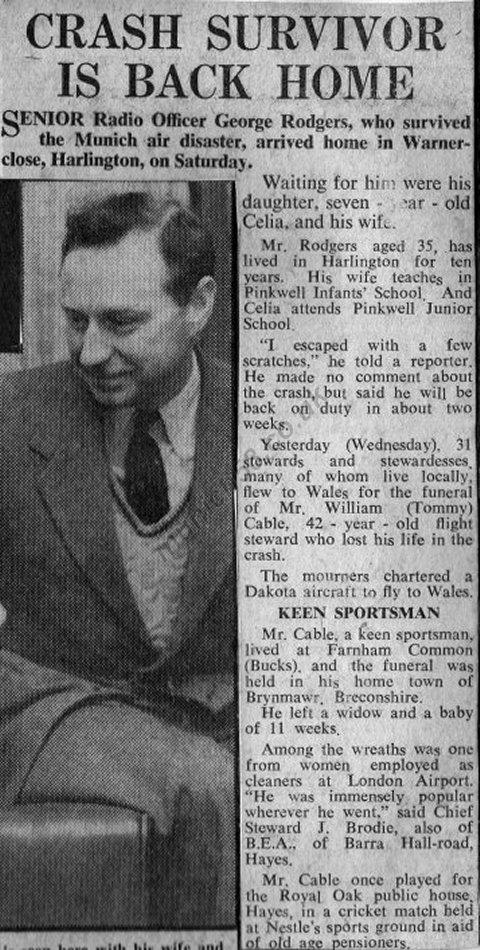 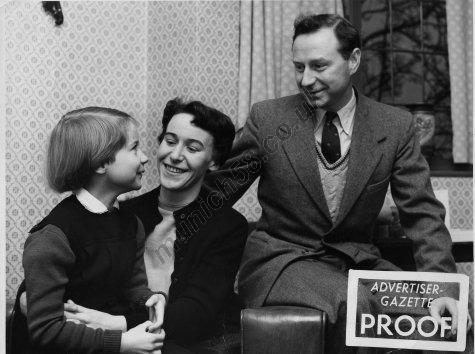 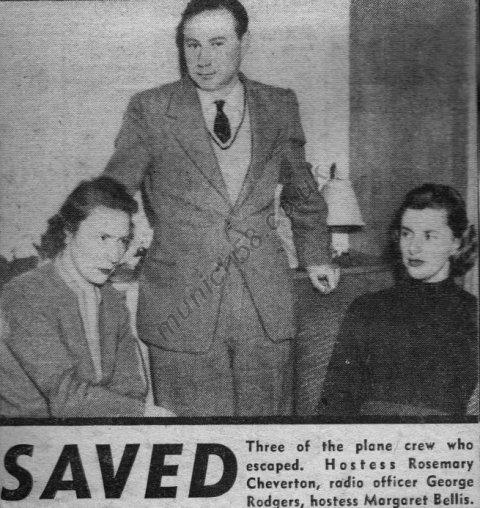 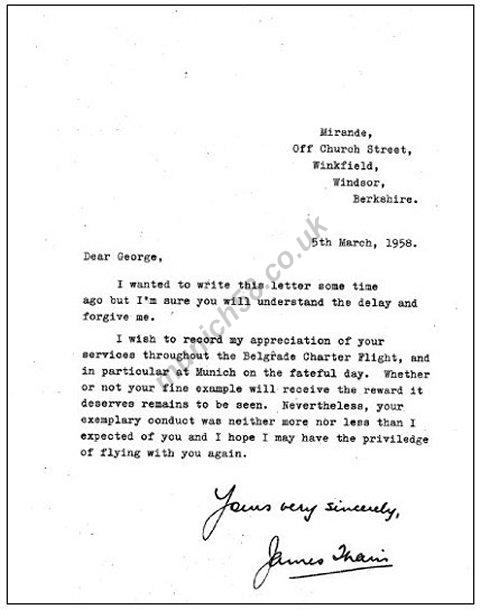 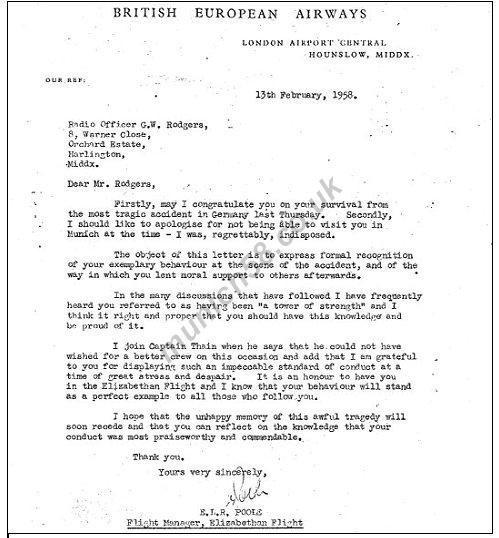 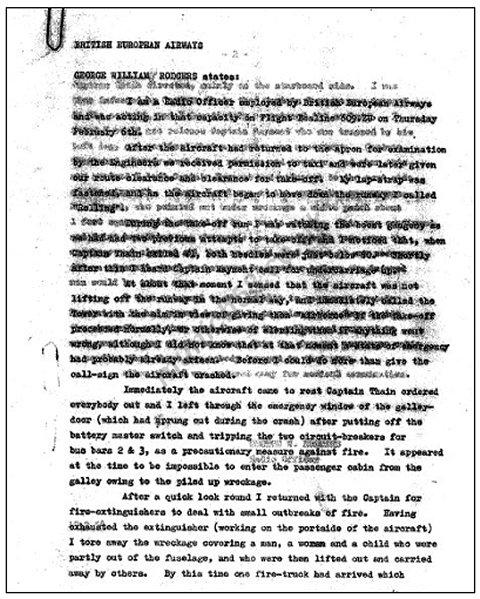 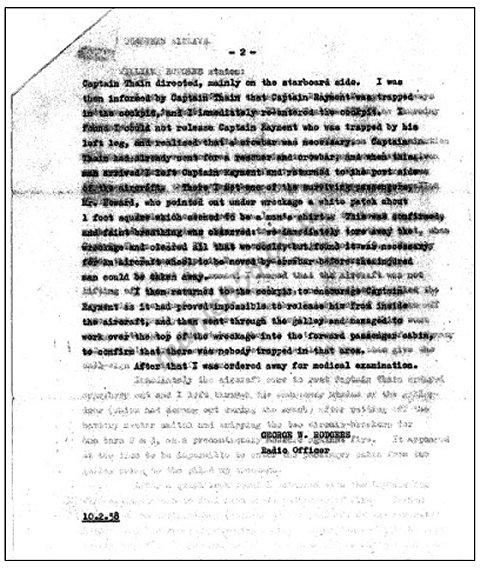