There has been a heated debate recently regarding the badge worn by the United team in the 1958 FA Cup Final. Tradition has it that the bird is a phoenix, representing the club rising from the ashes following the air crash.

However, another theory has been put forward – the badge is actually an American Eagle and that this was embroidered on the shirt because of an American Trade Fair that was going on in Britain at the time. In an attempt to solve the mystery, I contacted the Curator at the Manchester United Museum. Her reply was as follows:

Neither of those stories is correct. One of our newspaper cuttings says the following:

" Just to forestall any speculation, Manchester United’s new Wembley badge is not a tribute to Germany or to Munich. The eagle forms part of badge which has recently been granted to the City of Manchester. It is not strictly part of the coat of arms, though it is complimentary to it.

First permission for its use has been accorded Manchester United for the Cup final. A town hall authority explained that the eagle was not Germanic in origin or design, but was symbolic of Manchester’s connection with ancient Rome.

The ‘M’ is the fesse dancettee recording the association with an ancient family which were Lords of the Manor, Though it looks like an M it is not in fact. The ring around it is symbolic of Ringway. The mural crown is the symbol of municipal corporation. It is in silver or white to symbolise clean air – in the provision of which Manchester has played a pioneer role." 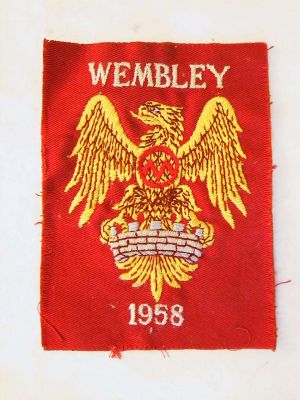 In February 2008, united fan and author, Tony Smith, wrote an article titled “United, the Eagle and the Myth of the phoenix”. A PDF copy of this article can be downloaded from here. Please note that this article is copyrighted to Tony Smith and is not to be reproduced in part or whole without written permission.