Dennis Viollet, one of the survivors of the Munich air crash has died at the age of 65.  Dennis, who lived in Florida, had been ill with a brain tumour. His family were at his bedside when he died.

After the Munich crash, in which he suffered terrible head injuries, he continued to play for United, but joined Stoke in 1962, followed by a spell playing in the USA.

He and his wife Helen moved to Florida, where he opened a ‘soccer school’, coaching youngsters. He attended a reunion of Munich survivors in 1997 but became ill soon afterwards. He had surgery, chemotherapy and radiotherapy before returning to Jacksonville, where he was given the freedon of the city.

As a mark of respect, United and Chelsea players wore black armbands during the FA Cup quarter final game. 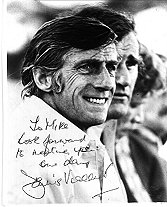